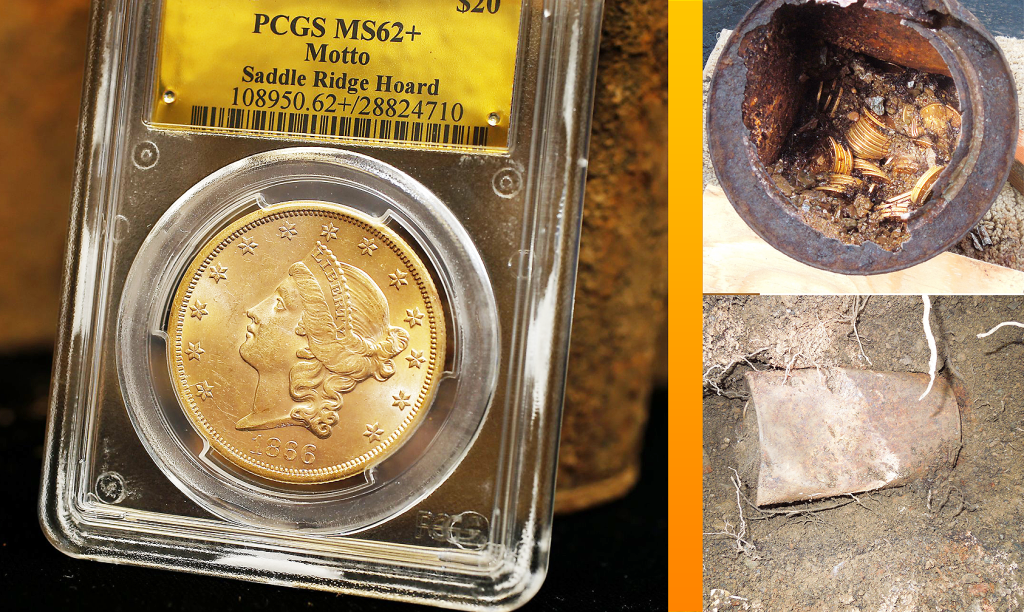 LOS ANGELES –  A Northern California couple out walking their dog on their Gold Country property stumbled across a modern-day bonanza: $10 million in rare, mint-condition gold coins buried in the shadow of an old tree.

A Northern California couple found $10 million worth of rare coins dating back to the 1800’s while hiking on their property. Ben Tracy reports on how they’ve become accidental millionaires.

Nearly all of the 1,427 coins, dating from 1847 to 1894, are in uncirculated, mint condition, said David Hall, co-founder of Professional Coin Grading Service of Santa Ana, which recently authenticated them. Although the face value of the gold pieces only adds up to about $27,000, some of them are so rare that coin experts say they could fetch nearly $1 million apiece.

“I don’t like to say once-in-a-lifetime for anything, but you don’t get an opportunity to handle this kind of material, a treasure like this, ever,” said veteran numismatist Don Kagin, who is representing the finders. “It’s like they found the pot of gold at the end of the rainbow.”

Kagin, whose family has been in the rare-coin business for 81 years, would say little about the couple other than that they are husband and wife, are middle-aged and have lived for several years on the rural property where the coins were found. They have no idea who put them there, he said.

The pair are choosing to remain anonymous, Kagin said, in part to avoid a renewed gold rush to their property by modern-day prospectors armed with metal detectors.

They also don’t want to be treated any differently, said David McCarthy, chief numismatist for Kagin Inc. of Tiburon.

“Their concern was this would change the way everyone else would look at them, and they’re pretty happy with the lifestyle they have today,” he said.

They plan to put most of the coins up for sale through Amazon while holding onto a few keepsakes. They’ll use the money to pay off bills and quietly donate to local charities, Kagin said.

Before they sell them, they are loaning some to the American Numismatic Association for its National Money Show, which opens Thursday in Atlanta.

What makes their find particularly valuable, McCarthy said, is that almost all of the coins are in near-perfect condition. That means that whoever put them into the ground likely socked them away as soon as they were put into circulation.

Because paper money was illegal in California until the 1870s, he added, it’s extremely rare to find any coins from before that of such high quality.

“It wasn’t really until the 1880s that you start seeing coins struck in California that were kept in real high grades of preservation,” he said.

The coins, in $5, $10 and $20 denominations, were stored more or less in chronological order, McCarthy said, with the 1840s and 1850s pieces going into one canister until it was filed, then new coins going into the next one and the next one after that. The dates and the method indicated that whoever put them there was using the ground as their personal bank and that they weren’t swooped up all at once in a robbery.

Although most of the coins were minted in San Francisco, one $5 gold piece came from as far away as Georgia.

Kagin and McCarthy would say little about the couple’s property or its ownership history, other than it’s in a sprawling hilly area of Gold Country and the coins were found along a path the couple had walked for years. On the day they found them last spring, the woman had bent over to examine an old rusty can that erosion had caused to pop slightly out of the ground.

“Don’t be above bending over to check on a rusty can,” he said she told him.

They are located on a section of the property the couple nicknamed Saddle Ridge, and Kagin is calling the find the Saddle Ridge Hoard. He believes it could be the largest such discovery in U.S. history.

One of the largest previous finds of gold coins was $1 million worth uncovered by construction workers in Jackson, Tenn., in 1985. More than 400,000 silver dollars were found in the home of a Reno, Nev., man who died in 1974 and were later sold intact for $7.3 million.

Gold coins and ingots said to be worth as much as $130 million were recovered in the 1980s from the wreck of the SS Central America. But historians knew roughly where that gold was because the ship went down off the coast of North Carolina during a hurricane in 1857.